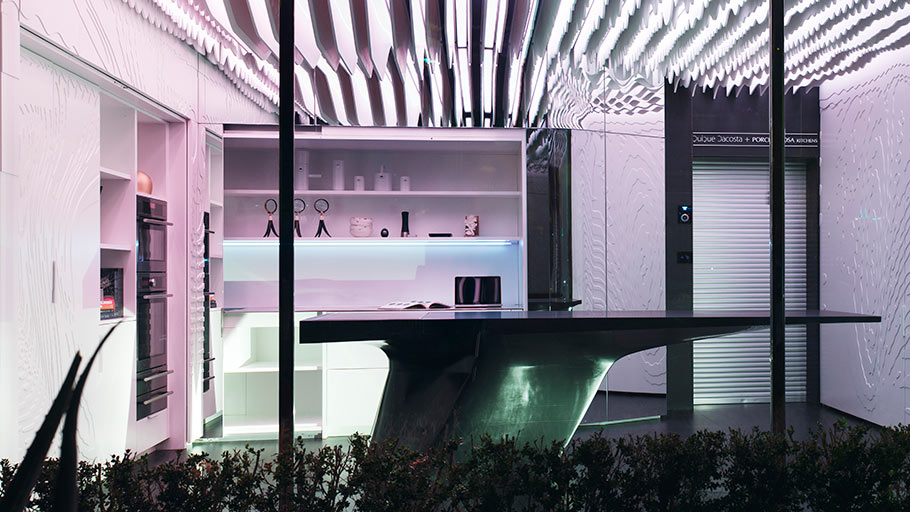 With the aim of diversifying professional haute cuisine, the Michelin three-star-awarded chef, Quique Dacosta, has recently decided to open a Creativity Studio in his restaurant in Denia (Alicante).

The Creativity Studio was founded under the gastronomical concept of “Dacosta’s landscapes”. An initiative which came from the very same chef’s table in order to encompass the whole of the space, ranging from the table to the ceilings, and the walls as well. A combination of objects and removal of borders in and around the space, function and decoration, which turn Quique Dacosta’s studio into a laboratory  of flavours. As the chef himself alludes to: “It is in this place where the most important things in a restaurant take place, but mostly, it is where both the creativity and innovation processes are brought to life”.

It is at this point where the kitchens by PORCELANOSA Grupo are of particular importance, since they arrive in Quique Dacosta’s creative space in order to both capture and show the perfect kitchen designed by the chef. “The technology applied to this kitchen is what makes all the difference”.

The kitchen by PORCELANOSA Grupo and Quique Dacosta, the cornerstone of the Creativity Studio

The kitchen designed by the chef, Quique Dacosta, for the firm Gamadecor turns out to be the main attraction in the Creativity Studio. A logical, functional and professional kitchen which is the result of two experiences: On one hand, Dacosta’s in the field of gastronomy, and on the other hand, PORCELANOSA Grupo’s experience in the area of kitchen manufacturing. According to Quique Dacosta: “We have created a multifunctional kitchen: the most futuristic space when the kitchen doors are closed, and the most practical kitchen when all the doors are opened, and the closest table to the chef”.

As the most relevant piece of furniture, we find a central island, which has been one-piece manufactured with the KRION® Solid Surface mineral compact in black. Resistance and avant-garde design in order to create a magnificent canvas where all the culinary creations can be shown. All of this without considering the dishes themselves, since the versatility which KRION® both provides and allows for the plating up to be highlighted, thus, enhancing their features and embellishing the art of cuisine. Furthermore, it is possible to prepare dishes on this very same surface, since it has been fitted with a cooking area on one of its sides.

Retractable fronts are located in the column area of the kitchen, which have also been bas-relief decorated with the KRION® acrylic stone. The choice regarding the Solid Surface has been the 1100 Snow White version, which contrasts and provides the set with pureness, by being combined with mirrors. In its inside, one can find a bench manufactured with White KRION® with a washing area, a LED backlighting system in the walls and built-in electrical appliances.

With regard to the ceiling, a non-worked new dimension appears. The reason lies in the fact that the ceiling has been fitted with a system of slats manufactured with the Snow White KRION®, which provide the design with continuity as a whole. The result obtained is wonderfully creative, thanks to a high fluidity regarding the shapes between the fronts and the ceiling.

One of the other advantages of this exclusive kitchen equipment turns out to be that the installation systems in the kitchen also remain hidden, ranging from the most powerful smoke filter systems, to the lighting systems, audio systems, etc. Yet another example of the passion and the care for detail from the pairing of PORCELANOSA Grupo and Quique Dacosta. “By paying attention to detail in the Studio, we have extended every single thing which has something to do with the experience of eating in both a pure and natural way: food, atmosphere, lighting and sound”.

Dacosta’s and PORCELANOSA Grupo’s creative design, accessible for every kitchen

That is not, however, the end of the collaboration between the chef Quique Dacosta and Porcelanosa Kitchens. The firm Gamadecor, among its designs, allows for the new professional kitchen designed by the aforementioned chef, which will be available for use in every home. A kitchen that is open, functional and excellent, and which will cover both the demands and expectations of haute cuisine lovers, and furthermore, it will let them have a new and interesting experience in the art of cooking.